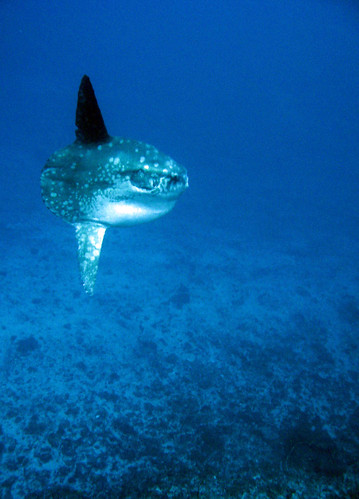 Bali, Indonesia from the 7-11 August to do 9 dives over 3 diving days. On the first day, we went to Crystal Bay, straight for the mola molas or Sunfish, which Nusa Penida/Bali is famous for this time of year. We saw 2, and boy were they deep! The first was tricky to spot it was so deep, I would guess 43-45m. I was going down to meet it whilst attempting to point it out to Maeva when the guide signaled a second one coming our way slightly shallower. It was 37-38m and in my group only Maeva attempted to get closer, the others stayed at about 25m watching from a distance.  What a majestic yet strangely goofy fish! It had such black eyes, and such white patches and you can have a look at them in the photos. This was my first Mola experience so I was not really paying close attention to capturing them on my camera though. It was like when we went to Malapascua for the thresher sharks, I was concentrating on them with my own two eyes and they seemed A LOT closer. The photos are not a good depiction of how I felt about the whole encounter. 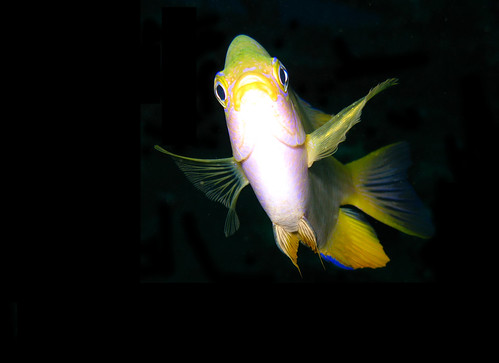 We also dived at Tulamben, the Liberty Wreck. Conditions were calm, warm, relaxed. I love black sand and rocky beaches, but unfortunately I lost/got my phone stolen at some point in the day despite leaving it in a deep pocket in my backpack the whole day. But apart from that, it was a lovely day and I actually had time to take a few photos because conditions were calmer and I didn’t have to concentrate on looking out for other divers so much. For the dive sites around Nusa Penida, currents can be really strong and it can get super deep with some down and out currents. I would say Nusa Penida is more challenging for less experienced divers and Tulamben is ideal for noobs. 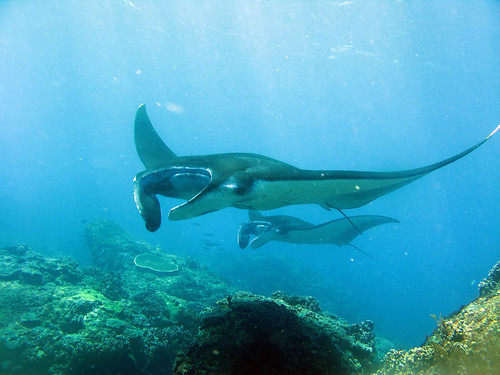 We did Manta Point at Nusa Penida on the last day and it was terribly cold. First dive we swayed around in the surf, getting excited by the silhouettes of distantdivers, only to realize the “mantas” had bright fins. During the surface interval someone spotted the mantas on the surface which encouraged us to brave the icy waters a second time. During the first five minutes we were hanging around the cleaning station and I decided to go a little further out than the rest so we could cover more area between us. Suddenly in the distance, I saw the clear outline of a manta and I started banging my tank. I turned around to point it out to the others and Terry was gesticulating wildly at me. When I turned around a second manta just whizzed over/above me, giving me the shock of my life. We could have collided because of my sudden movement but it was even swifter, maneuvering out of the way. Soon another pair joined them and we had the best dive of the trip, because the great thing about manta point is the mantas hang around for reeeally long, pretty much the entire dive.